What happens during the MARGA Online Competition?

You would like to integrate the MARGA Online Competition into your personnel development program and are interested in the exact procedure? - Here you get a detailed overview.

The MARGA Online Competition starts each year in November. Over a period of approximately six months, the participants lead their own virtual company as a team and compete with other teams.

The deadline for registration is October 31st. After the registration of your teams we take care of all further organization, communication and implementation and inform you regularly about the current status. During the registration phase, the participants will receive their individual login data for the MARGA software and can choose between several dates for the kick-off sessions via web conferencing.

After the registration phase, we will start the training and test round at the beginning of November. The test round consists of two periods. Between the deadlines, the teams have sufficient time to get familiar with their new job as Board of a global player, to organize within the team and above all to get to know the market behavior. There is no ranking during the test round and we advise the teams not to focus on the profit of their companies, but to find the drivers of impact and customer preferences.

The Online Course "Financial Basics" is an integral part of the program for all registered participants and accessible via the MARGA software. It makes sense to process the online course during the test round in parallel with the training in the business simulation. The course conveys basic business finance and managerial accounting and is based on the content of the business simulation. The total processing time is about 6-8 hours. The participant can pause the course at any time and the individual status is saved.

Especially in the test round, it is important that the teams contact the MARGA tutors at any time!

The decision days are particularly exciting. So far, in plan mode, it has only been possible to see the impact of one's own decisions: How does the key figure MARGA Value Added change when we lay off 1,000 employees, buy raw materials or change payment behavior? But after the market simulation, the teams see for the first time the impact of the decisions of their competitors on the market and on their own company.

Now the teams start with the accumulated knowledge about markets and customers in the main round. New challenges and new competitors await them here. To ensure that all teams are well prepared for the main round, we offer each group a transfer to the main round via a web conference. It analyzes what happened on the markets during the test round and gives valuable information for the main round.

During the main round there will also be webinars on specific topics that the teams encounter during the business simulation.

Now the competition really starts! The teams have to prevail in their respective foursome group. Therefore, they have to develop a well-thought-out strategy and implement it operationally during the five periods.

Usually the teams already have the opportunity to enter a new market for the first time in this first period. As in reality, initial investments ("market entry costs") are necessary and the board members have to weigh costs and potential. In the market research report, the teams see which of their competitors have decided to enter the new market after the simulation. The sale starts in the new market segment already in the following period.

Additionally to the regular results reports, the teams receive the annual reports of the competitors after the second period. The balance sheet for example gives information on: Who has invested in new machines? Who has a lot of raw materials on stock? Did the competitors already prepare for the upcoming vacation period? Which market strategies do the teams aim at?
This and even more can be analyzed and used for their own planning of the following periods.

Furthermore, the vacation period has started and has to be planned carefully: One third of the workers is not available for production in the third period. Thus, the non-productive personnel costs will significantly increase. How will the teams manage this period? Have they recruited workers, or will they make use of overtime and temp workers? Have they bought trade goods or pre-produced to increase the stock?

The teams have mastered the third period, which represents a special challenge with capacity bottlenecks due to holidays. Most MARGA companies compensated the vacation period by ordering trade goods, preproduction or with recruiting temporary workers.

The teams are faced with new challenges during the fourth period: Sometimes rising personnel costs or costs for raw materials or trade goods challenge the teams. Then they have to try to find other cost reduction potentials to offset these rising production costs.

Are the strategies already paying off? Have the market entries paid off with the associated investments?

The teams of the MARGA Online Competition are on the home stretch now. Although the MARGA companies are set up for long-term success, there are nevertheless a few possibilities for the MARGA Boards to enhance the success towards the end of this round. Most of the time the race for the finals remains on fire until the end of the round.

After the fifth period the main round is finished. The four best teams in terms of group placement and accumulated MARGA Value Added reach the final round of the Online Competition. In the "Shareholders' Meeting" the finalist teams are announced. Both the teams and the corresponding contact persons from the personnel department are personally notified and congratulated by us.

The final round of the MARGA Online Competition consists of five periods, four of which are held as usual. The four finalist teams face a completely new, challenging initial situation in this final round. A well-thought-out strategy and efficient teamwork can secure the decisive competitive advantage here.

The last decision-making periods will be carried out during the exciting online live final in a thight time frame.

We are happy to help you! Arrange a non-binding consultation appointment with MARGA Program Manager Jannis Tenhaeff in just a few clicks. 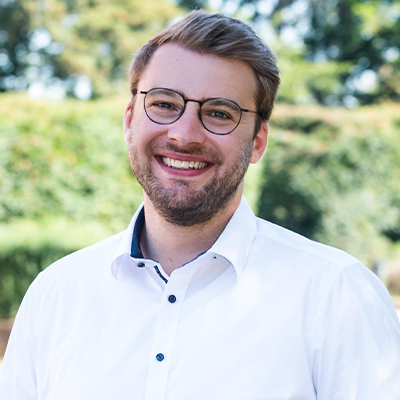 The MARGA Online Competition is an integral part of our Junior Manager Program - our trainee program for executive talents. MARGA makes entrepreneurial thinking tangible without real risks. The high dedication of our trainees has paid off once more: they are in the live final today.

Developing strategies together, sharing success and failure, winning as a team, that was a great experience for our team.

In addition to professional training, the MARGA Online Competition gives us the opportunity to promote virtual teamwork between our international locations in a targeted manner. Through high self-motivation and efficient teamwork, this year our two teams have reached the finals – we are thrilled!